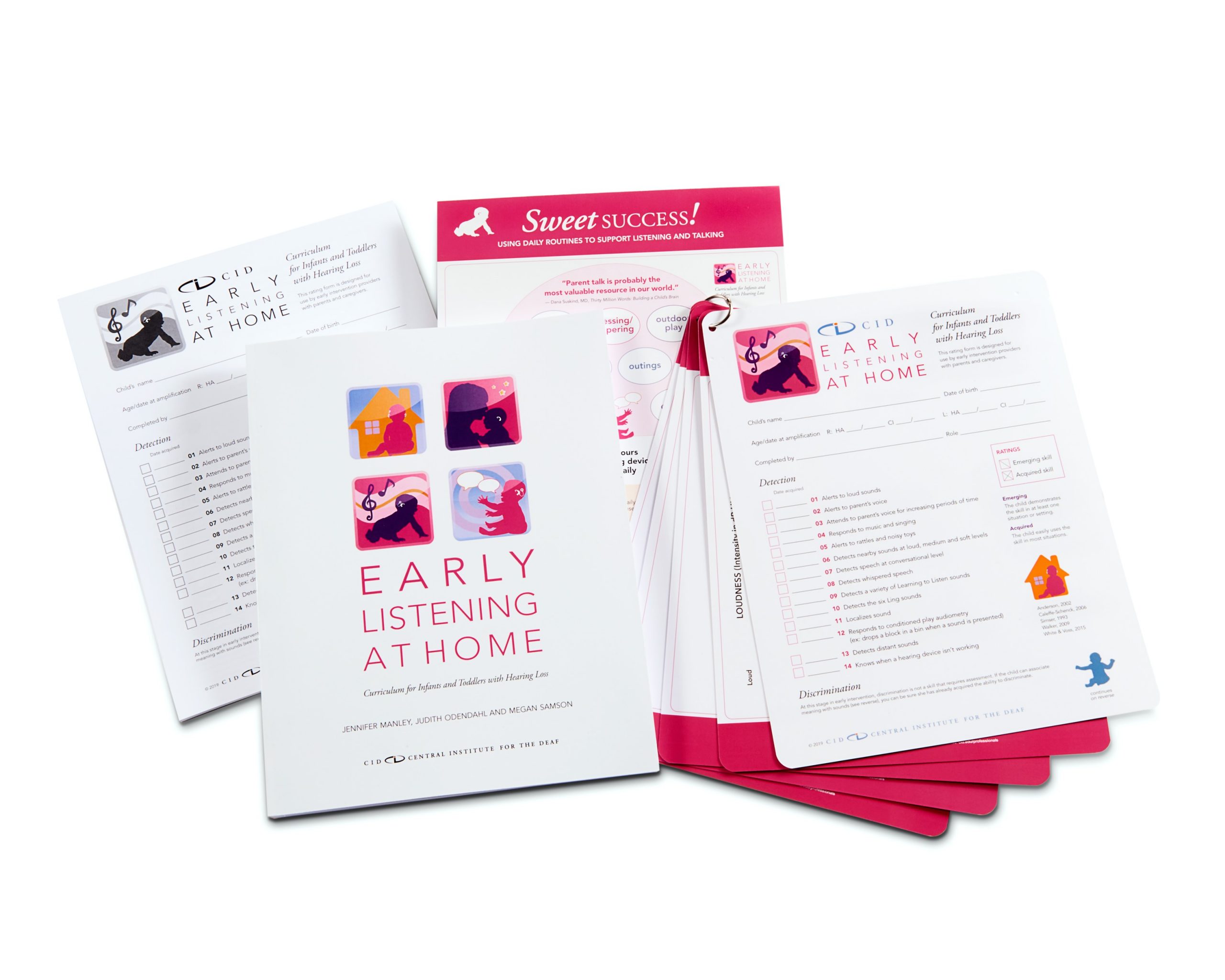 $75.00
Curriculum for early intervention providers working with parents of children... 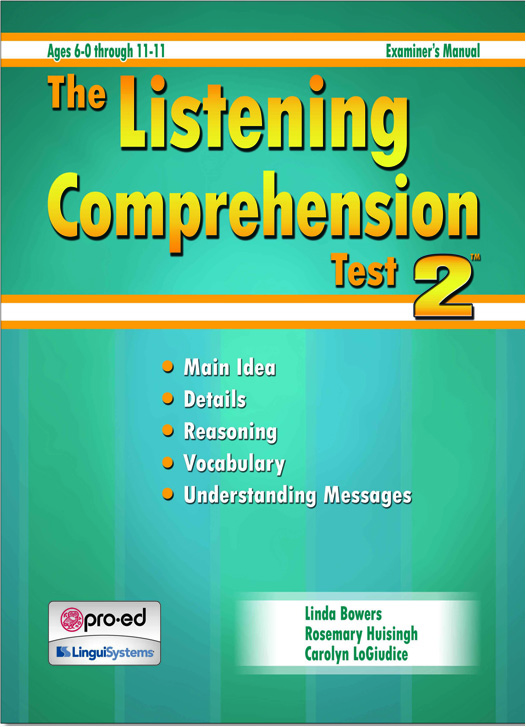 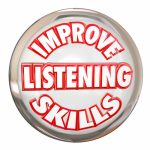 Speech perception is the set of listening skills that are essential for communicating by spoken language.  Speech perception skills can be described in four categories: awareness, discrimination, identification and comprehension. Each skill set is described on web pages in  the Listening (Auditory Skills) Development section.

These listening skills do not develop sequentially from one category to the next. Rather, a child might simultaneously be developing skills in two, three, or even all four categories, but at varying levels of complexity.

Speech perception training also requires attention to the complexity of the listening task, or the amount of acoustic information in the message.  Generally, levels of complexity are described as the sound/phoneme level, word level, phrase/sentence level, and discourse/connected speech. 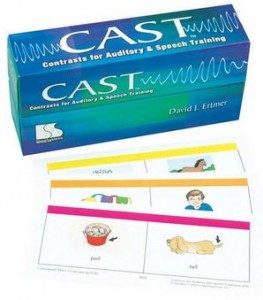 A discrimination task requires a student to perceive differences and similarities between two sounds, words or longer utterances. The properties being judged can be volume or intensity, duration, pitch, stress pattern or other feature. Discrimination tasks require a student to report whether two stimuli (never more) are “the same” or “different”.

Discrimination tasks are often confused with identification tasks. Some examples can clarify the two categories of listening tasks.

Comparisons of Discrimination and Identification Tasks

Teacher: Tell me if these sound the same: shhh (pause)   ch .

Student: No, they sound different.

Teacher: Point to the card that shows the sound you hear. (pause): shhh.

Student: (points to card) [Note: it is recommended that student also repeat the sound.]

Teacher: Please tell me what you  hear: sheep. 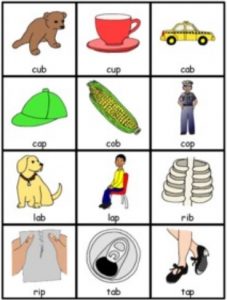 Although “Are they the same or different?” seems like a clear question, students can become confused about what the teacher is asking. Children who are often asked to identify the first sound or first letter of a word might say mop and mat are the same because they have the same first letter. An older student who is asked whether single and solo are the same might respond yes because they have similar meanings. When a teacher is asking a student to make an auditory discrimination it might be necessary to clarify what property the student should be comparing: the component sounds? number of syllables? stress pattern?

Erber (1982) notes that professionals working with students who have hearing loss often use an auditory discrimination task to determine the cause of an erroneous response to a different auditory task.

A phonics lesson, for example, might ask a student to identify the letter associated with the phoneme -e- (as in bed) – an auditory identification task. If the student points the letter a rather than e, the teacher might check to see if the student perceives the acoustic differences between the short e vowel sound and the short a vowel sound.

During a discussion about farming wheat, a student who comments, “My mom doesn’t like wheat. She pulls it out and throws it away,” may be unfamiliar with the wheat plant and not hear the subtle difference between wheat and weeds.

In the above examples, the identification errors likely occurred because the phonemes -a- and -e-  and the words wheat and weed are acoustically similar and difficult to discriminate. The teacher could respond by asking, “What did you hear?” That question will prompt the student to produce a vowel or word that may not (due to an error in his speech production) match what he heard. Instead, the teacher can check the student’s ability to discriminate. Here are two examples of checking discrimination during the identification tasks described above.

Examples of Discrimination as Error Analysis and Remediation

Teacher: Listen. Which vowel do you hear:  bed? (an identification task)

Student: (points to letter a)

Teacher: Oh. That says /-a-/. Are these two sounds the same or different?

Teacher: Those words are almost the same, but the last sound is a little different. Listen: wheat (pause) weed. Do they sound the same to  you?

In Example A, if the student says the phonemes sound the same, the student has made an auditory error. The teacher can give the student feedback like, “Yes, those sounds are very close to each other. They are almost the same. But they are a little different. Listen again.” The sounds can then be produced slightly elongated to highlight the differences. If the student is asked to say the sounds, he will likely produce two sounds that sound very, very similar to each other. This may be a task for the speech specialist. The teacher, however, can spend one or two valuable minutes saying the sounds as she points to the letters, then 1 or 2 minutes more having the student listen and decide which sound he hears, with the teacher giving immediate feedback.

In Example B, many students with hearing loss will not hear the difference between wheat and weed. The teacher can check the vocabulary by pointing to a picture of wheat and asking the student to name the plant. If the student is unable, the teacher can a quick explanation of the word, the differences between wheat, a product farmers sell and the weeds they kill or throw away.  She would then draw attention to the final letter and sound and move on with the lesson. Auditory practice may not be necessary because if this student had been familiar with the wheat plant as a farming product, the auditory error would probably not have occurred. 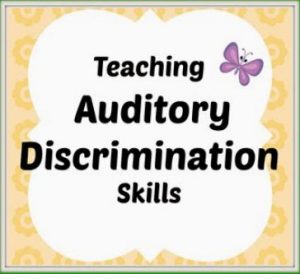 – When the teacher first asks the student to discriminate between two stimuli , the teacher should produce the vowels (or words) as naturally as possible, without elongating them.

– Always let the student know if her response is correct and emphasize that the two sounds are very similar.

– The discrimination task should be presented at least three times, with one trial presenting the same vowel (or word) twice.

– If the first response was incorrect, the second and third trials can use a slightly exaggerated production to support better discrimination.

Free PD Webinars from CID – Central Institute for the Deaf

Posted August 2019. This information was authored by Julia West, teacher of the deaf/hard of hearing who has taught students with hearing loss in private and public schools for over 20 years. She is co-author of the CID SPICE for Life Auditory Learning Curriculum and authors the Listening and Self-Advocacy sections of the Teacher Tools e-Magazine 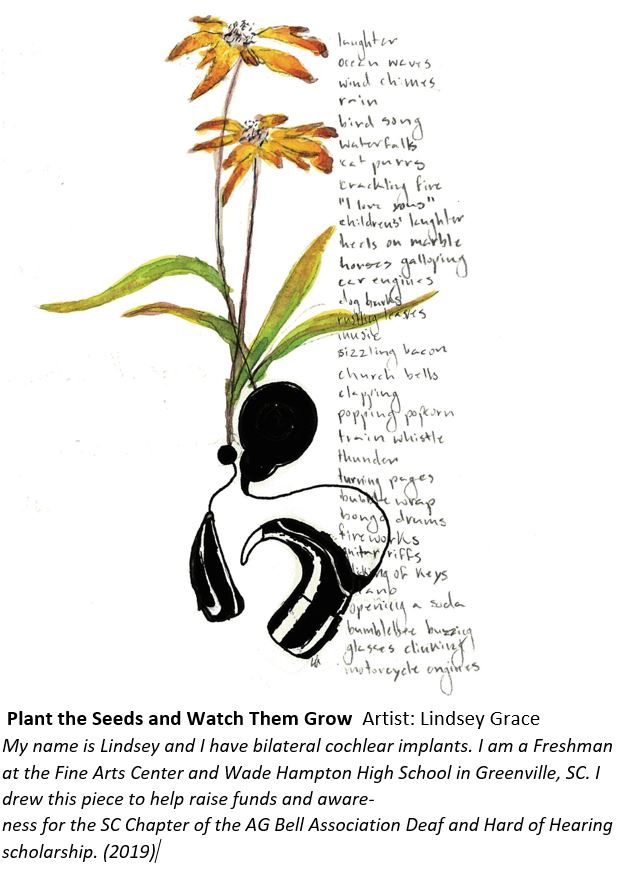