WE HEAR WITH OUR BRAINS, NOT OUR EARS.

The ears are just a way for sound to get in for processing by the brain (Carol Flexer).

Hearing is a first-order event for spoken language, reading, and learning which is all based on early development of the auditory centers of the brain.

As of June, 2013, statewide data from North Carolina indicated that 92% of families wanted their child to listen and speak, whereas only 6% chose simultaneous communication, 2% chose ASL, and 1% chose Cued Speech. It is clear that parent choices have changed dramatically over time as 40% chose spoken language in 1995, which increased to 85% in 2005.  The success of developing age-appropriate speech and language skills is built on early, consistent auditory stimulation which is the foundation of development within the auditory cortex of the brain. 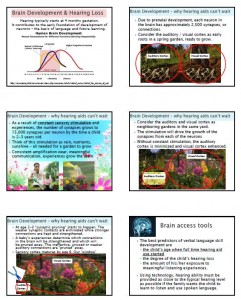 Thus, there is a critical window for auditory neural development. Studies in brain development show that sensory stimulation of the auditory centers of the brain is critically important and influences the actual organization of auditory brain pathways. The critical language learning window is secondary to the development of sensory input processing centers in the brain. This, this critical period extends from birth to approximately 3 years of age when brain neuroplasticity is the greatest.

As we look further into brain development, the foundation of the development of auditory cortex structures to process minute sequential differences in sound, such as in speech, occurs significantly earlier than 3.5 years. Early structures within the brain develop based on consistent sensory stimuli. When born, infants with typical hearing have brains with approximately 2500 synapses, or connections, per neuron. As a result of constant stimulation, the number of synapses grows to 15,000 per neuron by the time a child is 2-3 years old. At age 2-3 years “synaptic pruning” starts to happen. The weaker synaptic connections are eliminated while the stronger connections are kept and strengthened. Thus, if the synapses within the auditory cortex have not been constantly stimulated via amplification and frequent, effective communication with the young child by the age of about 2 years, the majority are likely to be pruned away in the next year or so in favor of the stronger visual processing structures.

To summarize, hearing is a first-order event for spoken language, reading, and learning. Consistent listening experiences in early infancy (birth through age 3) are critical for the development of speech and language in young children and sets the foundation of a strong spoken language base that is essential for reading.

For more information on research related to auditory maturation and the impact of hearing loss review the recent research, especially that by Anu Sharma