Auditory Brainstem Implants – Now for Children who are Deaf

We hear with our brains, not our ears

Information found on Supporting Success for Children with Hearing Loss provides many resources for developing the listening, language, cognitive, literacy and academic participation skills of children who are deaf or hard of hearing.  Approximately 1 out of the 2.5 children per 1000 identified with hearing loss at birth through newborn hearing screening have a severe to profound hearing loss. Due to hearing loss that occurs after birth, about 1 out of 9 school-age children with identified hearing loss are deaf (severe to profound hearing loss). In 2010 it was estimated that 1/2 to 1/3 of all young children who were deaf received cochlear implants and it is likely to be a higher proportion now. Over 200,000 people have received cochlear implants worldwide.

Background:  Some children have been born without auditory nerves or other cochlear or auditory nerve conditions that prevent them from being cochlear implant candidates. Other children contract meningitis with resulting hearing loss and calcification of the cochlear, which prevents successful cochlear implantation. Until very recently their only option for learning language was through the use of American Sign Language or other forms of visual communication …. until now.

What is it? The Auditory Brainstem Implant is a prosthetic hearing device that stimulates neurons directly at the human brainstem, bypassing the inner ear and hearing nerve entirely.

FDA: On January 22, 2013, L.A.-based House Research Institute and Children’s Hospital Los Angeles announced that the United States Food and Drug Administration (FDA) gave final approval to begin a clinical trial of an Auditory Brainstem Implant (ABI) procedure for children. The trial is a surgical collaboration sponsored by the House Research Institute in partnership with Children’s Hospital Los Angeles and Vittorio Colletti, MD of the University of Verona Hospital, Verona, Italy.

New Attention: The recent video of a young boy hearing his father’s voice for the first time following auditory brainstem implantation has caught the attention of many http://www.cbsnews.com/8301-204_162-57590253/deaf-boy-with-auditory-brain-stem-implant-stunned-after-hearing-dad-for-first-time/ 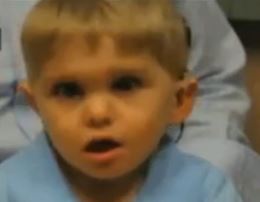 ABI History: The auditory brainstem implant, or ABI, was originally developed for adults who developed neurofibromatosis Type 2 Nf2). These tumors often invade the auditory nerve, making the use of hearing aids or traditional cochlear implants ineffective. The first auditory brainstem implant in such a patient was performed in 1979 at the House Ear Institute. In 1992, an advanced multichannel ABI was developed and a series of patients with NF2 received this implant to study the safety and efficacy of the device. The ABI was first trialed in children in 1997 with increasing use.  Over 1000 ABIs have been implanted globally. After over 15 years of case studies that prove that ABI was a viable option for children, this technology has now been approved for use.

FDA Approval for Children: In the United States ABIs were previously only approved for adults (18 & over) and only for patients with NF2. In January 2013, the US FDA approved a clinical trial of auditory brainstem implants for children. At the end of May 2013, the first child in the United States received an auditory brain-stem implant at age 3.  In Europe, ABIs have been used in children and adults, and in patients with NF2 as well as other auditory complications such as auditory nerve aplasia and cochlea ossification, such as secondary to meningitis. Candidacy is infants or children  who have deafness from conditions that do not allow for successful cochlear implant surgery including severe congenital malformation of the inner ear (no hearing nerve or no cochlea), scarring of both inner ears due to infection / meningitis, otosclerosis, or injury, injury to the hearing nerve or inner ear from a severe skull fracture or auditory neuropathy/dyssynchrony (AN/AD).

Normal Hearing is NOT restored: Advances such as this in hearing technology has made it more possible than ever before for a child with hearing loss to develop language commensurate with his or her age peers and, with appropriate support, attend the neighborhood school in a regular classroom. However the technology is the EASY part! Even with wonderful hearing technology these children will not have normal hearing restored. Hearing aids and implants focus on allowing communication from 3-6 feet to be perceived. Hearing is a distance sense and most people with hearing loss cannot ‘overhear’ communication occurring beyond this 3-6 foot bubble clearly. If you are a young child developing language for the first time this is especially true. The best results are seen when children are provided experiences that allow their brains to learn to listen, process and comprehend the auditory signals delivered by the hearing technology.

Success Depends on Much More than the Technology: Success for children with hearing loss depends on consistent use of early communication interaction strategies. Families learn these techniques through early intervention from knowledgeable, highly qualified providers, such as teachers of the deaf or hard of hearing, educational audiologists, and specially trained speech language pathologists. Even though children may keep up with learning the number of words as their age peers, there are typically delays in social communication skills, secondary to their challenges ‘overhearing’.

Resources: There are many resources available to families and professionals working with children who are deaf and hard of hearing to update their skills on the changing needs of these children and how to appropriately serve them.