Cochlear implants are an option for children who have very little hearing and receive little or no benefit from hearing aids. Refer to Cochlear Implants – What, When, Why, How for additional basic information. Videos that describe a cochlear implant and how it works: Khan Academy YouTube video    Advanced Bionics YouTube video;  CID QUICK TIPS VIDEO: Cochlear Implant Components Strategy for fastening, securing and decorating CI processors

Parts of the cochlear implant

The implant is surgically placed under the skin behind the ear. The basic parts of the device include: 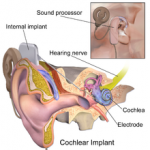 There are a number of factors that determine the degree of success to expect from the operation and the device itself. Cochlear implant centers determine implant candidacy on an individual basis and take into account a person’s hearing history, cause of hearing loss, amount of residual hearing, speech recognition ability, health status, and family commitment to aural habilitation/rehabilitation. A prime candidate is described as: The Parts of the Cochlear Implant and Candidates information above was excerpted from Wikipedia.

One Cochlear Implant or Two?

Research Findings  on one vs. two Cochlear Implants

A five-year study, published in the journal Ear and Hearing, was conducted across Victoria, New South Wales, Queensland, South Australia, and New Zealand, involving cochlear implant clinics and early intervention centers with more than 160 children. They found that children with hearing loss who were fitted with a second cochlear implant early in life developed better language skills.“Children in this study with bilateral CIs developed vocabulary and spoken language significantly faster than children with only one CI. This has enormous implications for their long-term future.” Recently, the New Zealand Health Department recommended a change of the current federal funding policy in favor of having all hearing-impaired children younger than the age of six years fitted with bilateral implants. Information on predicting long-term outcomes. This information can be useful when establishing expectations for intensity of services and improvements in communication for all types of potential CI candidates.
CID QUICK TIPS VIDEO – Troubleshooting a Cochlear Implant

What about a Cochlear Implant for a Child with Single-Sided Deafness?

A 2014 Hearing Review article described cochlear implantation for a child with single sided deafness. Identified difficulty listening issues:
–Understanding soft speech (whispers)
–Listening in a large room
–Hearing teacher when her back was turned
–Many situations when noise is present
–Issues in some social situations
The following comments were by the 10-year-old child who received an implant in her deaf ear: Before [my cochlear implant], it was normal for me to hear things differently, like “girled cheese” vs “grilled cheese” or “fork “ vs “pork.” I tried out for the school spelling bee but didn’t make it because my teacher had to repeat the words over and over again.”  “In small groups, it was hard to hear my classmates because we have to whisper. I always had to position myself in the classroom so I could hear my teacher. I couldn’t hear my teammates or coach when at practice or playing a game. They would have to yell or tap me on my shoulder to get my attention….. I am much more confident. I’m glad I got a cochlear implant and wouldn’t want to give [it] back.”

Fitting an FM/DM system to a student with hearing loss can be tricky as mixing ratios can vary based on student preference. Be sure to do some evaluations (i.e., Functional Listening Evaluation using the harder, nonsense materials as you vary the mixing ratios).  Resource. Updated January 2016.
Share This!
Copyright Ⓒ 2020. All Rights Reserved